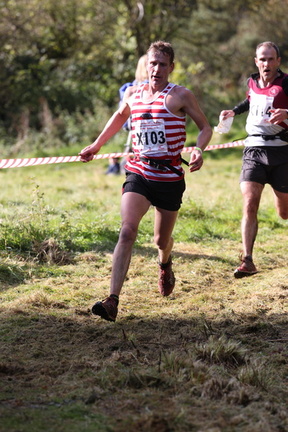 Following the pattern of the summer (or was it an early winter) the weather on the day prior to the race was murky and wet. To add to the organiser\'s usual problems was the fact that heavy rain in the early part of the week had turned the River Derwent into a raging torrent instead of the usual placid progress to be found in June. A decision was made to re route the race along the riverbank then across the road and back to the playing field. Apart from appearing highly dangerous, one of the reasons for re routing was the lack of volunteers to catch the floating bodies as they were swept under the bridge. Needless to say, the decision not to cross the river was questioned by some of the more vociferous members of Dark Peak. A few runners commented afterwards that they felt it was a better route without the river crossing. The organiser however will keep the river crossing unless there is an obvious danger.
Despite the weather, there were 288 runners and Dark Peak scored in the ladies and super vet. (0/50) classes. At one stage it looked as though the vets. (0/40) winner would be from Dark Peak, but it turned out that Tim Tett, who finished a creditable 12th overall had been wrongly classified. Well he looks old enough doesn\'t he?
A further nightmare for the organiser was the cock up over the ladies results, where for some reason \"she\" finished up wearing \"his\" number so that when number say 224 went flashing past the finish, \"she\" was recorded as having broken all women\'s records. This mix up occurred twice so the stewards\' enquiry went on for some time.


Grindleford Carnival committee is very grateful for the support given by Dark Peak, not only for the race, but in the generous purchase of raffle tickets. There is usually a winner from the club and this year was no exception with Jim Fulton being the lucky recipient of a camera.