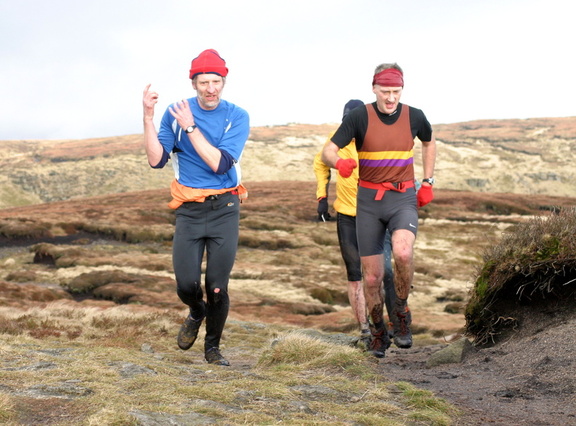 The route had been something I had thought about previously, as Blackden is probably my favourite part of kinder as it lends itself to many options.With the postponement of the springs race it as a nice chance to get it in the calendar.

Feedback from those that ran it was good so hopefully we can find a slot in the calendar for it to be run again.

A fairly simple route with 2 checkpoints (Mad Woman's Stones and Seal Stones) but with route options between every checkpoint. With more runnings I’m sure an optimal “line” will be found in due course.

In the men's race there were only 2 seconds separating first and second with Tom edging Ralph for the win. A mention to Tom Pape for running this in sub 45 mins and then a few days later putting together a slightly longer run to the tune of around 90 miles. Grand effort Tom!

Talking of times sub 40 minutes is definitely doable, even for some of us mere mortals. The question is, would sub 35 be doable for some of our more fleet footed folk? Over to Tom S and Co…

4 women toed the starting line with Majka taking honours, helped by the fact that Helen and Martha, while enjoying the lovely weather and views visited (what has been renamed as) “Mad Jim's Stones”, instead of Mad Woman’s Stones. More on that below.

A number of people visited the newly named Mad Jim's Stones but I think the best story comes from the man who named them. Here is Jim’s account of his race:

This morning I attempted to run your Blackden Skyline TT and got back to the starting point 55 minutes and 52 seconds after having set off.

Unfortunately, I failed to visit Mad Woman’s Stones due to the sparklingly clear weather as, had it been misty, I would have been on a compass bearing from Dean Hill to MWS. The rocks that I visited are labelled as “Mad Jim’s Stones” on the attached satellite map and are 876 feet west of MWS. I have calculated from the speed that I was travelling at after leaving Mad Jim’s Stones, that it would have taken me 4 minutes 15 seconds to run from there to MWS and back again. It seems to me that your options as R.O. are:

2 Add on the 4 minutes and 15 seconds, together with any additional time penalty that you see fit and ridicule me in public!

I will accept my fate no matter what.”

Entertaining as that reads, as RO it made me panic and so onto Strava I went just to confirm I hadn’t made the same mistake. Alas relief and I was safe in the knowing I had visited the correct “Stones”. It would have been a very interesting situation if an RO had not managed to visit their own checkpoints in their own race and would have certainly got at least a nomination for the pertex.

Sharing this information around a few who run the race on the Sunday it became apparent we had another who missed the correct stones! After brief discussion approval by the RO a chance of a rerun for both was granted for 6.45 Monday morning. So a true head to head played out with young Jim taking the tape by 2 seconds…