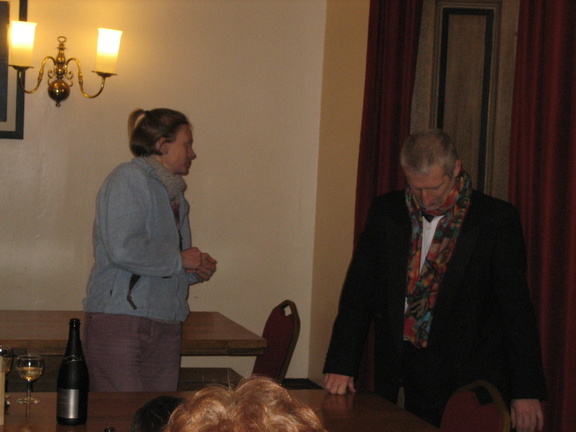 Initially I had slight concerns regarding the race as it was quickly organised in response to the Covid situation. However, it turned out to be popular with many favourable responses received from the 26 runners, along with kind birthday wishes. The essence was an 11 mile race with 11 hundred feet of ascent to be completed during the week of the 11th day of the 11th month. The distance was accurate (even though measured with a bit of string) but the height involved was a little more than estimated.

There was some route choice, but attempting the most direct lines was often a mistake as Tim Mackey found on High Neb trig. The major route choice was at what point to leave the conduit and whether to climb the big wall. The best running conditions were certainly early in the week as later runs encountered very strong winds and increased difficulties under foot.

Fastest time was by Tom Saville and Oli Johnson running round together in the dark they recorded a resounding 1.33.39. They even had time to discuss various topics and conclude that ‘Running isn’t always about racing’! Really? Does that mean they’ll let some of us mere mortals beat them next year?

Sally Fawcett was fastest female and achieved an excellent time of 1.43.55, especially considering she appears to have run an extra .29 miles. Second female was Clare Oliffe in a highly commendable time of 1.52.25. It was good to see Clare and Lee Walker embrace the race theme and start together on Sunday at 11.11. John Webber finished in an outstanding time of 1.38.31 for an M60, which was also the best time for M50 and M55 categories.

Six praise worthy ‘elevenoligists’ started at precisely 11secs past 11mins past 11 on the 11th day of the 11th month. Three of these runners, Bob Bryan and the Arundale brothers lost time as they were foolish enough to follow the RO assuming he knew the best way. The RO also happened to finish the race a year older than he started. Jim Paxman started at the same time but realised he’d lost his phone and retraced his steps back to the Sportsman to look for it. Fortunately he found it and started again. This time his dog lost its nerve and refused to pass some scary dogs meaning another retreat to the Sportsman. Jim started for the third time two days later dogless and finally finished in a notable 1.52.03.

Even though people were running separately there were some very close times around the 1.51mins mark, with six runners finishing within a couple of minutes of each other. An even closer race was between the three M70’s who all finished within one minute of each other. As usual, all three produced excuses why they ran so slowly. Peter Gorvett stopped on route for a chat with Hugh Cotton, Mick Cochrane had to get his dog around the barbed wire and the RO took the wrong line on his first attempt and was still tired from this for his second. It is interesting to note that almost half the field of 26 runners were aged over 60.

Even though High Neb is well known by club runners and seemingly impossible to get wrong, Andy Barnett discovered that not to be the case in thick mist. A number of runners experienced problems with cows and lost valuable time, especially Eliot Waterhouse. Perhaps we can ask Nicky Spinks to organise a training session with her herd to improve our cow passing skills.

Chris Lawson finished in a splendid time of 1.37.54. However, he missed out CP6 therefore had to suffer the consequences and have his time adjusted. To determine this, the RO consulted with the Honourable Judge Jim Paxman for a verdict which was an addition of 4 minutes.

After Rod Hill Mark Gamsu got totally lost in a field, chatted up the farmer’s daughter, inadvertently stopped his watch and finally finished in the dark. He submitted an estimated time which was increased by a further few minutes by the RO and Judge Jim. This additional time will be reduced if Mark decides to marry the farmer’s daughter. However Mark says he may have to wait a while as it seems the farmer’s daughter is fed up being proposed to by runners lost in that field.

For some inexplicable reason Maurice Musson had marked CP5 incorrectly on his suspect map. Arriving at his fictitious CP5 which was a long way off route, he then realised he had also failed to mark CP6, not even incorrectly. The story then became rather confused, but basically his random, self selected CP5 meant he was faced with a long and arduous way back, arriving at the Sportsman from completely the wrong direction. Finally finishing in over three hours, he had gone much further and much higher than anyone else. Even though it may be considered inhumane, it was still deemed necessary to impose a time penalty to ensure the RO did not receive death threats from Chris and Mark.